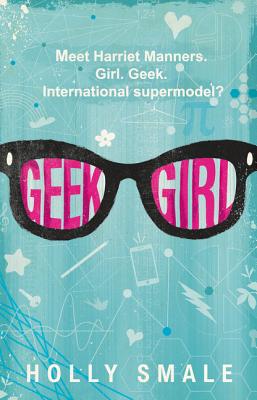 This is book number 1 in the Geek Girl series.

Harriet Manners is a geek. She always has been, and she thought she always would be—but when she's discovered by a modeling agent, she leaps at the chance to reinvent herself.

There's only one problem: Harriet is the definition of awkward. Can she transform from geek to chic?

Holly Smale was unexpectedly spotted by a top London modeling agency at the age of fifteen and spent the following two years falling over on catwalks, going bright red, and breaking things she couldn't afford to replace. By the time she had graduated from Bristol University with a BA in English Literature and an MA in Shakespeare, she had given up modeling and set herself on the path to becoming a full-time writer. Geek Girl was the #1 bestselling young adult fiction title in the UK in 2013. It was shortlisted for several major awards, including the Roald Dahl Funny Prize. Holly currently lives in London, England.

“A smash hit in the UK, this is a cheeky, fabulous, fun read for anyone who has dreamed of a fresh start.” — ALA Booklist

“Quirky, likable, and geeky, Harriet is an outsider to the modeling world but possesses a natural charm that is everything the fashion world needs. Pure fun.” — School Library Journal

“Harriet is irresistible. Readers will experience love at first chapter for this geek girl who always manages to hold on to her sense of humor as she navigates the treacherous worlds of school friendships and high-fashion modeling.” — Voice of Youth Advocates (VOYA)