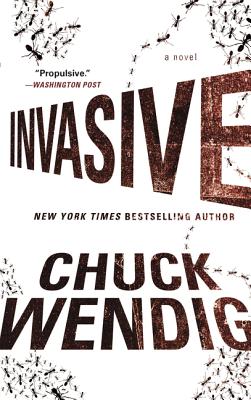 From the author of Wanderers and the Miriam Black series

“Think Thomas Harris’ Will Graham and Clarice Starling rolled into one and pitched on the knife’s edge of a scenario that makes Jurassic Park look like a carnival ride.” —Kirkus Reviews (starred review)

On an isolated island in the middle of the Pacific, a team of scientists is employed by a charismatic billionaire hoping to change the world through cutting-edge research.

In a small cabin on a remote lake in the middle of the Adirondacks, FBI futurist Hannah Stander confronts a barely recognizable human body—one skinned alive by thousands of genetically engineered ants.

Hannah’s investigation ultimately leads her to Kohole Atoll. Though the team there vehemently denies any connection to the body, the more Hannah studies the group, the more she suspects their work has sinister applications. And the more it looks like no one is getting off the island alive.

Chuck Wendig is the author of the Miriam Black thrillers (which begin with Blackbirds) and numerous other works across books, comics, games, and more. A finalist for the John W. Campbell Award for Best New Writer and the cowriter of the Emmy-nominated digital narrative Collapsus, he is also known for his popular blog, terribleminds.com. He lives in Pennsylvania with his family.

“Enthralling...Wendig does an impeccable job blending fact and fiction as he describes invasive species and insects being used as biological weapons. This is a propulsive tale that also examines our interaction with — and ma­nipu­la­tion of — the natural world.” — Washington Post

“Excellent...Follows the path set forth by Michael Crichton (a la Congo or Jurassic Park) in which Wendig’s exhaustive research brings a convincing story of humanity tinkering with nature — only to have it backfire...Expect to see it on the big screen.” — Men's Journal

“This roller-coaster survival tale with copious amounts of creepy insects will appeal to fans of Michael Crichton.” — Booklist

“Chuck Wendig can congratulate himself on a stunning new achievement: becoming the architect of all of my future nightmares...INVASIVE is a terrifying and tightly written thriller.” — RT Book Reviews

“Think Thomas Harris’ Will Graham and Clarice Starling rolled into one and pitched on the knife’s edge of a scenario that makes Jurassic Park look like a carnival ride. Another rip-roaring, deeply paranoid thriller about the reasons to fear the future.” — Kirkus Reviews (starred review)

“[A] rich, darkly funny page-turner with details designed to make those little hairs on the back of your neck stand up with how plausible [it seems].” — Locus