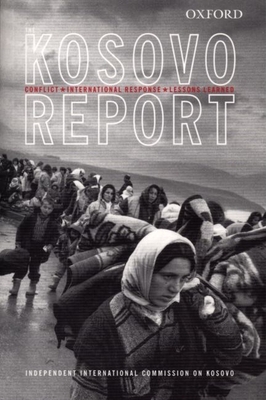 By Independent International Commission on
$110.00
Email or call for price.

Could the atrocities committed in Kosovo have been prevented? What is the future of Kosovo and the surrounding region? What lessons can we learn from such a brutal conflict?
In this groundbreaking report, an impressive group of international experts--from eleven countries on four different continents--make an important attempt to find the answers to these and other burning questions. They not only map the road that led to war in Kosovo but also find the crossroads where war might have been prevented. While many reports have been published in the aftermath of the Kosovo crisis, not one attributes any political responsibility--until now. This is the first narrative to detail the factors behind the conflict, the implications for the future, and the lessons to be learned. Indeed, understanding the events in Kosovo will help to avoid future international conflicts and to foster new ways of dealing with them.
Addressing issues that range from the origins of the Kosovo crisis to Kosovo under the rule of the United Nations, this enlightening report will be the definitive resource on the events in Kosovo, as well as a vital resource for future peacemaking efforts.

The Independent International Commission on Kosovo was created on the initiative of Swedish Prime Minister Goran Persson. Justice Richard Goldstone of South Africa and Mr. Carl Tham, Secretary General of the Olof Palme International Center in Stockholm, act as chairperson and co-chairperson of the Commission, respectively.