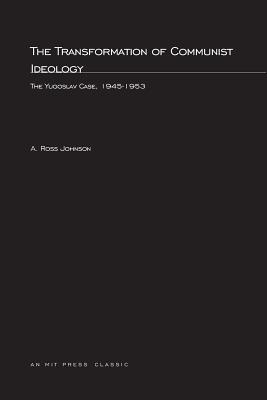 By A. Ross Johnson
Not available

The first book to trace in detail the relationship between pre-1948 Yugoslav deviant views and their full development after Tito's break with Stalin in 1948.

This is the first book to trace in detail the relationship between pre-1948 Yugoslav deviant views and their full development after Tito's break with Stalin in 1948. The author, who speaks fluent Serbo-Croatian, has searched the pertinent literature to show how the deviant Yugoslav Titoist doctrine grew out of local and immediate needs of the revolutionary Communist regime.

Part I of the book treats the period between the end of World War II and the outbreak of open conflict with Stalin in 1948, examining the Yugoslav Communists and the nature of their revolution, their postwar program of developing socialism, and their analysis of the international situation. The divergence of the Yugoslav notion of people's democracy from that prevailing in the Soviet Union and elsewhere in Eastern Europe is described. In Part II the author analyzes the Titoist doctrine which emerged between 1948 and 1953, and remarks on the immediate Yugoslav reaction to the break with Stalin, the re-evaluation and critique of the Soviet system, and the reappraisal of the international situation. Various elements of the doctrine of socialist democracy as well as the revised view of agricultural collectivization are also studied. The book's third part characterizes the transformation of Yugoslav Communist ideology during the period 1945-1953, formulating conclusions about the process of ideological change.