The Road to Madness: Twenty-Nine Tales of Terror (Paperback) 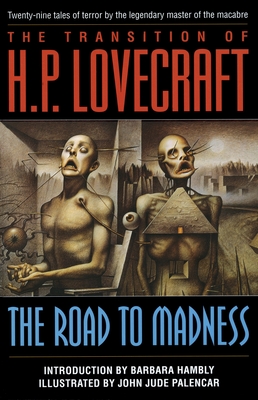 One of the most influential practitioners of American horror, H.P. Lovecraft inspired the work of Stephen King, Anne Rice, and Clive Barker. As he perfected his mastery of the macabre, his works developed from seminal fragments into acknowledged masterpieces of terror. This volume traces his chilling career and includes:
IMPRISONED WITH THE PHARAOHS--Houdini seeks to reveal the demons that inhabit the Egyptian night.
AT THE MOUNTAINS OF MADNESS--An unsuspecting expedition uncovers a city of untold terror, buried beneath an Antarctic wasteland.
Plus, for the first time in any Del Rey edition:
HERBERT WEST: REANIMATOR--Mad experiments yield hideous results in this, the inspiration for the cult film Re-Animator.
COOL AIR--An icy apartment hides secrets no man dares unlock.
THE TERRIBLE OLD MAN--The intruders seek a fortune but find only death!
AND TWENTY-FOUR MORE BLOOD-CHILLING TALES

Almost completely ignored by the mainstream press during his lifetime, H. P. Lovecraft has since come to be recognized as one of the greatest writers of classic horror, on a par with Edgar Allan Poe, Lovecraft's mentor. H. P. Lovecraft's work has been translated into more than a dozen languages, his tales adapted for film, television, and comic books, and he has been the subject of more scholarly study than any other writer of horror fiction save Poe.