To End a War: The Conflict in Yugoslavia--America's Inside Story--Negotiating with Milosevic (Paperback) 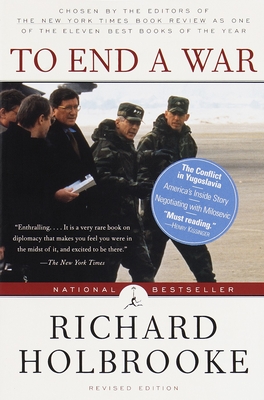 When President Clinton sent Richard Holbrooke to Bosnia as America's chief negotiator in late 1995, he took a gamble that would eventually redefine his presidency. But there was no saying then, at the height of the war, that Holbrooke's mission would succeed. The odds were strongly against it.

As passionate as he was controversial, Holbrooke believed that the only way to bring peace to the Balkans was through a complex blend of American leadership, aggressive and creative diplomacy, and a willingness to use force, if necessary, in the cause for peace. This was not a universally popular view. Resistance was fierce within the United Nations and the chronically divided Contact Group, and in Washington, where many argued that the United States should not get more deeply involved. This book is Holbrooke's gripping inside account of his mission, of the decisive months when, belatedly and reluctantly but ultimately decisively, the United States reasserted its moral authority and leadership and ended Europe's worst war in over half a century. To End a War reveals many important new details of how America made this historic decision.

What George F. Kennan has called Holbrooke's "heroic efforts" were shaped by the enormous tragedy with which the mission began, when three of his four team members were killed during their first attempt to reach Sarajevo. In Belgrade, Sarajevo, Zagreb, Paris, Athens, and Ankara, and throughout the dramatic roller-coaster ride at Dayton, he tirelessly imposed, cajoled, and threatened in the quest to stop the killing and forge a peace agreement. Holbrooke's portraits of the key actors, from officials in the White House and the Élysée Palace to the leaders in the Balkans, are sharp and unforgiving. His explanation of how the United States was finally forced to intervene breaks important new ground, as does his discussion of the near disaster in the early period of the implementation of the Dayton agreement.

To End a War is a brilliant portrayal of high-wire, high-stakes diplomacy in one of the toughest negotiations of modern times. A classic account of the uses and misuses of American power, its lessons go far beyond the boundaries of the Balkans and provide a powerful argument for continued American leadership in the modern world.

Richard Holbrooke began his diplomatic career in Vietnam in 1962, serving in the Mekong Delta and the American embassy in Saigon. After a tour on President Johnson's White House staff in 1966-67, he wrote one volume of the Pentagon Papers, served as special assistant to Undersecretaries of State Nicholas Katzenbach and Elliot Richardson, and was a member of the American delegation to the Paris peace talks on Vietnam. Holbrooke was Peace Corps director in Morocco from 1970 to 1972 and managing editor of Foreign Policy from 1972 to 1976. He served as Assistant Secretary of State for East Asian and Pacific Affairs (1977-81) and U.S. Ambassador to Germany (1993-94). He was Assistant Secretary of State for European and Canadian Affairs from 1994 to 1996, when he became the chief architect of the Dayton Peace Accords. He is co-author of Clark Clifford's memoir, Counsel to the President, and is currently a vice chairman of Credit Suisse First Boston, based in New York. He is married to the author Kati Marton and has two sons, David and Anthony.

In Selecting To End a War as one of the 11 Best Books of the Year, The New York Times wrote:

"Diplomacy is the grungiest job... But it must be satisfying because this enthralling book is also a heartfelt call to America to use its power when societies break down and to become a steady global force resisting human rights abuses everywhere. It is filled with anecdotes and sharp pictures of the wily Balkan leaders Holbrooke had to deal with, as well as with shrewd and seldom flattering analyses of the personalities and motivations of timid American and NATO military commanders... His recreation of battles over principle and tactics with Western generals and State Department and White House officials are dramatic and his description of a rudderless Administration during the early days of his efforts is astonishingly candid, and convincing. His combativeness may offend the pinstripe set, but it is wonderfully refreshing on the page. It is a very rare book on diplomacy that makes you feel you were in the midst of it, and excited to be there."
--The New York Times Book Review


MORE PRAISE FOR To End A War:

"One of the most important and readable diplomatic memoirs of recent times... His account should restore some respect to the much maligned art of diplomacy."
--The Washington Post

"A compelling account of a life-and-death negotiation -- the personal dynamics, the theatrical gestures, the unexpected snags, the leaks... A classic exercise in lock-up, great power diplomacy. To End a War is a riveting book."
--Time

"Holbrooke is brilliant, forceful, determined, focused... In his intuitive feel for the realities of power diplomacy and his strategic vision, he is the heir to Henry Kissinger in American diplomacy."
--The New York Post

"Of all the many excellent books that have been written on Bosnia, To End A War may turn out to be the most important. Holbrooke has written a superb book, one that is clear and honest... Bosnia needed a Holbrooke; perhaps more importantly, so did Washington, if it was to redeem its besmirched honor."
--Michael Elliott, Newsweek

"Easily the best book of recent years on how to carry off a diplomatic negotiation... We can only hope that the White House, Congress and the public are listening, and that generations of Americans will read Holbrooke's book."
--The Philadelphia Inquirer

"A natural writer, Holbrooke uses poetic license to dramatize events into an absorbing read. We have him bluffing, shouting at, or cursing Balkan politicians, negotiating deals of great consequence on the fly, stitching things together as he goes along."
--The Boston Globe

"A roller-coaster ride, from the driver's seat... The going is rambunctious and fascinating."
--Foreign Affairs

"Richard Holbrooke is the Quentin Tarantino of diplomacy... peppered with amusing anecdotes and shrewd insights."
--The Economist

"To End a War should be read by anyone who still believes that the relationship between the United States military and its political overseers is healthy."
--Thomas E. Ricks, The Washington Monthly

"Riveting and forthright... Holbrooke's memoir is both highly literate and informed, as well as notably readable. It is steeped in the tradition of diplomatic memoirs by eminent diplomatauthors such as Henry Kissinger and Harold Nicolson."
--Kirkus Review (starred)

"A penetrating portrait of modern diplomacy... essential for understanding how American power can be brought to bear on the course of history."
--Publishers Weekly

"Holbrooke on Bosnia is legendary."
--The Christian Science Monitor

"Absorbing... What mattered [to Holbrooke] was the exercize of American leadership in setting the post-cold war global pace, in keeping the peace in Europe, and in strengthening a Western alliance badly strained by what was otherwise regarded as a second-tier regional problem... Holbrooke has been hailed for prodigies of imperial shrewdness, manipulation, and overall orchestration. Yet his willingness to second guess some of his own tactics along the way adds to the credibility of his account."
--Stephen S. Rosenfeld, World Policy Journal

"The Dayton Agreement provided much-needed relief from the horrible war that preceded it, and it is largely to the credit of Richard Holbrooke that there is any agreement at all. He has now given us, in To End A War his memoir of this crucially important negotiation, the crowning achievement (so far) or an impressive diplomatic career. The book makes compelling reading."
--Paul Wolfowitz, The National Interest

"To End a War is a good book, well-written and very readable... It is invaluable to have such a substantial contribution to the public record, written by a principal player so soon after the event."
--Pauline Neville-Jones, Prospect

"To End a War goes a long way toward revealing a much more human and thoughtful figure behind the brash, pushy image. Though Holbrooke was presented in the media as a sort of diplomatic Lone Ranger, one of the constant themes of this book is the teamwork on which he always depended. The point is made in a dramatic and tragic way in his opening chapter, in which he describes how three of his closest colleagues lost their lives when their armored vehicle rolled off a mountain track on the outskirts of Sarajevo... This is one of several genuinely moving moments in To End A War."
--Noel Malcolm, Los Angeles Times Book Review

"A graphic and insightful account of one of the most difficult problems the United States has faced since the end of World War II."
--Warren Christopher

"This brilliant and remarkable book is both an absorbing first hand narrative of the Balkan conflict and an invaluable contribution to the history of our time. This is more than a book about Bosnia. There will be more Bosnias in our future, and To End a War offers basic guidance about the uses of American power in a dangerous world."
--Arthur Schlesinger, Jr.

"What Richard Holbrooke has given us in this impressive diplomatic memoir is a vivid and well written account of the heroic efforts put forth by the author himself and the small team he headed to spare the troubled Balkan region further bloodshed and horror, and to bring the endangered peoples of Bosnia hope, security, and normalcy of life."
--George F. Kennan