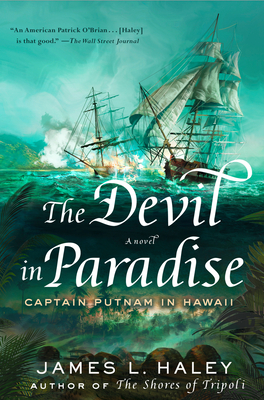 This is book number 3 in the A Bliven Putnam Naval Adventure series.

Captain Bliven Putnam returns, venturing into the Pacific to fight pirates in Malaya and match wits with the royals in Hawaii, in this next installment of award-winner James L. Haley's gripping naval saga.

Following the naval victories of the War of 1812 and the Second Barbary War, the United States is finally expanding its navy to take a place of prominence in world affairs. Bliven Putnam, now Captain of the sloop of war Rappahannock, has come into his own as a leader and is ordered to the Pacific. But with this new tour of duty to last more than two years, his patient wife, Clarity, unwilling to accept such a brief time together, at last puts her foot down. If she can't keep Putnam with her, then she'll just have to go with him.

As Putnam sets sail for his new home port in Honolulu, Clarity joins a new missionary effort from Boston to Hawaii. On their respective paths, the Putnams encounter a new breed of pirate and meet an unexpected force of nature: Kahumanu, the formidable queen of the Hawaiian Islands. Inspried by the real-life Olowalu Massacre and the famed Congregationalist missoin of 1819, this third outing will be unlike any adventure the Putnams have faced before.

James L. Haley is the award-winning author of The Shores of Tripoli and A Darker Sea, as well as numerous books on Native American, Texas, and Western history, and historical and contemporary fiction. His two biographies, Sam Houston (2002) and Wolf: The Lives of Jack London (2010), each won the Spur Award from the Western Writers of America. Passionate Nation: The Epic History of Texas (2006) won the Fehrenbach Award of the Texas Historical Commission. His most recent nonfiction is Captive Paradise: A History of Hawaii (2014).

"Haley does a brilliant job of introducing the reader to Hawaii as it existed in the early 19th century." —New York Journal of Books

“A most ingenious plot and story…Haley evidently knows his way around an archive, salting the meat of his story with savory details of Native Hawaiian society and political rivalries….But what elevates The Devil in Paradise is the equal time and storylines given to Clarity….The result is an adventure story of unusual historical detail and appeal to both—make that all—genders.” –Honolulu Magazine

“Haley spins a rousing naval yarn laced with action against slavers, a new breed of pirate, and an enraged sea captain seeking vengeance. An intimate understanding of Hawaiian history recounted through well-drawn, three-dimensional characters enriches his narrative. The Bliven Putnam novels bring a refreshing point of view to naval fiction, with a marked Yankee flavor.”—Quarterdeck Magazine