The Shores of Tripoli: Lieutenant Putnam and the Barbary Pirates (A Bliven Putnam Naval Adventure #1) (Paperback) 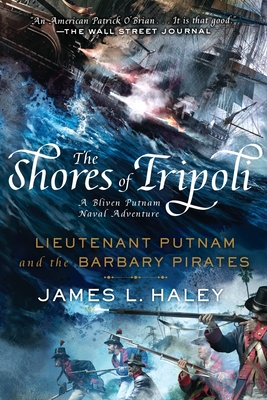 This is book number 1 in the A Bliven Putnam Naval Adventure series.

It is 1801 and President Thomas Jefferson has assembled a deep-water navy to fight the growing threat of piracy, as American civilians are regularly kidnapped by Islamist brigands and held for ransom, enslaved, or killed, all at their captors' whim. The Berber States of North Africa, especially Tripoli, claimed their faith gave them the right to pillage anyone who did not submit to their religion.

Young Bliven Putnam, great-nephew of Revolutionary War hero Israel Putnam, is bound for the Mediterranean and a desperate battle with the pirate ship Tripoli. He later returns under legendary Commodore Edward Preble on the Constitution, and marches across the Libyan desert with General Eaton to assault Derna—discovering the lessons he learns about war, and life, are not what he expected.

Rich with historical detail and cracking with high-wire action, The Shores of Tripoli brings this amazing period in American history to life with brilliant clarity.

James L. Haley is an award-winning historian and author of numerous books on Texas and Western history, as well as several works of fiction, including The Buffalo War, which has been in print for thirty-nine years and remains the definitive history of the final war of the Comanche, Kiowa, and Cheyenne Indians against Anglo domination; the multiple award-winning biography Sam Houston; and WOLF: The Lives of Jack London; among others. Haley's work has garnered many awards, including two Spur Awards (2002 & 2011) from the Western Writers of America. The Tempest is the next thrilling installment in his nineteenth-century American naval fiction series.

Praise for The Shores of Tripoli

“The history is thoroughly researched, the fiction inventive, the style at once easygoing and rapid....This is a marvelous and richly enjoyable novel, and the intended series to follow promises to do for the American Navy and the Marines what C.S. Forester and Patrick O’Brian did for the Royal Navy....More, please.”—Wall Street Journal

“James L. Haley has taken the naval adventure genre to places it has not gone before, filled with strong, believable characters who nearly jump of the page, deeply researched details of life both here and abroad...and a powerful, sweeping view of one of the seminal events in the early history of our country...a rollicking good time.”—Brian Kilmeade, author of Thomas Jefferson and the Tripoli Pirates

“It's a rare novelist who has a commanding grasp of history, and it's a rare historian who has an intuitive understanding of how to bring fictional characters to life. Fortunately for us readers of the Shores of Tripoli—and (please!) of the next book about Lieutenant Bliven Putnam—James L. Haley fuses historian and novelist into a spellbinding storytelling whole. There could be no better captain to sail this ship.”—Stephen Harrigan, bestselling author of The Gates of the Alamo and A Friend of Mr. Lincoln

“Historical fiction has to work simultaneously as history and fiction. Rarely do the stars align, but in this case they have. The Shores of Tripoli is a terrific novel, elegantly written, and grounded in  first-rate research.”—Ian Toll, author of Six Frigates

“It’s no surprise that Haley’s command of historical detail here is superlative, and his adrenaline-inducing descriptions of cannon-fueled sea battles are also first-rate.”—Booklist

“This is one more naval historical fiction series worth reading.”—Good Old Boat

“Rich with historical detail and cracking with high-wire action, The Shores of Tripoli brings this amazing period in American history to life with brilliant clarity.”—BookReporter.com

“Thanks to Haley, America now has its own Captain Horatio Hornblower in midshipman Lieutenant Bliven Putnam, who would sail the seas fighting the Barbary Pirates…Readers will savor the pacing and the wild ride across the seas with a young man making his mark on history.”—RT Book Reviews

“An award-winning historian who also writes fiction can be expected to deliver excellence, and Haley doesn’t disappoint. With poignant echoes of today’s horrors with terrorism, the book sadly reminds us this conflict is not new. The novel concludes with a dramatic, event-filled ending which brilliantly sets the stage for the following books in this new series. This wonderful book is, in historian Barbara Tuchman’s words, ‘a distant mirror.’ An absolute must read.”—Historical Novels Review

“A highly readable blend of fact and fiction....Rich with historical detail and filled with action, The Shores of Tripoli brings this amazing period in American history to life....The first entry in James Haley’s new series seems a fitting successor to the seafaring sagas penned by Forester and O’Brian.”—Herald-Dispatch