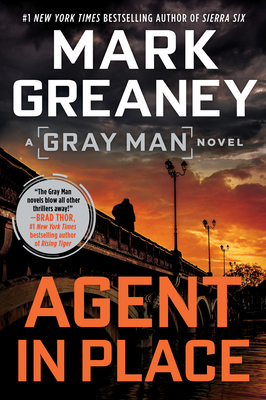 This is book number 7 in the Gray Man series.

Fresh off his first mission back with the CIA, Court Gentry secures what seems like a cut-and-dried contract job: A group of expats in Paris hires him to kidnap the mistress of Syrian dictator Ahmed Azzam to get intel that could destabilize Azzam's regime.

Court delivers Bianca Medina to the rebels, but his job doesn't end there. She soon reveals that she has given birth to a son, the only heir to Azzam's rule--and a potent threat to the Syrian president's powerful wife.

Now, to get Bianca's cooperation, Court must bring her son out of Syria alive. With the clock ticking on Bianca's life, he goes off the grid in a free-fire zone in the Middle East--and winds up in the right place at the right time to take a shot at bringing one of the most brutal dictatorships on earth to a close...

Mark Greaney is the New York Times bestselling author of Gunmetal Gray, Back Blast, Dead Eye, Ballistic, On Target, The Gray Man, Tom Clancy Full Force and Effect, Tom Clancy Support and Defend, Tom Clancy Commander in Chief, and Tom Clancy True Faith and Allegiance. With Tom Clancy he is a coauthor of Locked On, Threat Vector, and Command Authority.

Praise for Agent in Place

“Reminiscent of John le Carré…Exquisite in its execution, the relentlessly riveting, “Agent in Place” firmly plants Greaney alongside Brad Taylor and Brad Thor as the masters of this thriller subgenre.”—Providence Journal

“Readers of the great Tom Clancy will salivate over this fast-moving and well-plotted yarn, which is part of a consistently appealing series in which each assignment is billed as the most dangerous ever. Somehow, Greaney cranks out one winner after another. That's a lot of work for the Gray Man and plenty of vicarious pleasure for thriller fans.”—Kirkus Reviews (starred review)

“Greaney’s steady escalation of the risks that Court faces, and the exceedingly clever ways he tackles them, make this entry in the exemplary Gray Man series a can’t-miss.”—Publishers Weekly (starred review)

“Jam-packed with action and adventure. It is as modern as tomorrow’s headlines and moves with fascinating speed from country to country.”—Lincoln Journal Star

Praise for Back Blast

“Mark Greaney reigns as one of the recognized masters of action and adventure. Back Blast is no exception.”—New York Times and #1 internationally bestselling author Steve Berry