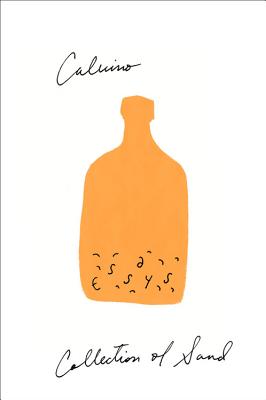 By Italo Calvino, Martin McLaughlin (Translated by)
$14.99
Email or call for price.

“Just like every collection, this one is a diary as well: a diary of travels, of course, but also of feelings, states of mind, moods . . . The fascination of a collection lies just as much in what it reveals as in what it conceals of the secret urge that led to its creation.” — from Collection of Sand

Italo Calvino’s unbounded curiosity and masterly imagination are displayed in peak form in Collection of Sand, the last of his works published during his lifetime. Here he applies his graceful intellect to the delights of the visual world, in essays on subjects ranging from cuneiform and antique maps to Mexican temples and Japanese gardens. Never before translated into English, Collection of Sand is an incisive and often surprising meditation on observation and knowledge, the difference between the world as we perceive it and the world as it is.

“Beautifully translated by Martin McLaughlin . . . To read [Collection of Sand] is to enter the presence of an exceptionally fervent and fertile mind . . . A brilliant collection that may change the way you see the world around you.” — PD Smith, Guardian