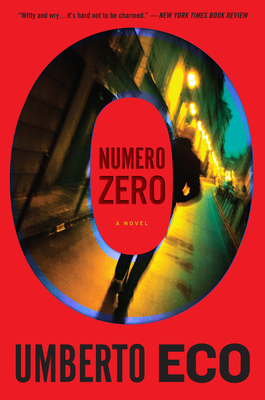 “Eco's new book engages on many levels, from the intense literary verve to the cunning insertion of conspiracy theories. Colonna, an unemployed writer, is hired to write the history of a newspaper, which will never see print, while one of his colleagues discovers that Mussolini may have met a different end than the historically accepted one. When Colonna digs deeper, the life he has made, and the lives of his friends, unravel in unexpected ways. Eco has produced another genre-bending, erudite piece of fiction that will amuse and distress lovers of literature and history with equal measure.”
— Raul Chapa (E), Book People Bookstore, Austin, TX

“One of the most influential thinkers of our time.” — Los Angeles Times

1945, Lake Como. Mussolini and his mistress are captured and shot by local partisans. The precise circumstances of Il Duce’s death remain controversial.

1992, Milan. Colonna, a depressed hack writer, is offered a fee he can’t resist to ghostwrite a book. His subject: a fledgling newspaper, which happens to be financed by a powerful media magnate. As Colonna gets to know the team, he learns of the editor’s paranoid theory that Mussolini’s corpse was a body double and part of a wider Fascist plot. It’s the scoop the newspaper desperately needs. The evidence? He’s working on it.

It’s all there: media hoaxes, Mafiosi, the CIA, the Pentagon, blackmail, love, gossip, and murder. A clash of forces that have shaped Italy since World War II — from Mussolini to Berlusconi. “Farcical, serious, satiric, and tragic” (Le Point, France), Numero Zero is the work of a master storyteller.

UMBERTO ECO (1932–2016) was the author of numerous essay collections and seven novels, including The Name of the Rose,The Prague Cemetery, and Inventing the Enemy. He received Italy’s highest literary award, the Premio Strega, was named a Chevalier de la Légion d’Honneur by the French government, and was an honorary member of the American Academy of Arts and Letters

UMBERTO ECO (1932–2016) was the author of numerous essay collections and seven novels, including The Name of the Rose,The Prague Cemetery, and Inventing the Enemy. He received Italy’s highest literary award, the Premio Strega, was named a Chevalier de la Légion d’Honneur by the French government, and was an honorary member of the American Academy of Arts and Letters.

“Witty and wry...slim in pages but plump in satire about modern Italy...it’s hard not to be charmed by the zest of the author.”—Tom Rachman, New York Times Book Review

"Frequently imitated for his amalgamation of intellect, conspiracism, and historical suspense, the author of In the Name of the Rose takes a more contemporary and satirical turn. In 1992, as Italy works to cleanse itself of corruption, a hack journalist is hired to ghostwrite a memoir about a never-to-be-published gossip rag in order to cover up the real rationale for its fakery. Eco’s warped parable is rooted in a very specific time and place, but readers of Elena Ferrante or Rachel Kushner will likely catch the barbs in his clever absurdities."—Vulture (New York), "7 Books You Need to Read this November"

"Colonna, the struggling ghostwriter at the heart of this story, is transfixed by a juicy scoop: that Mussolini was not killed by partisans in 1945, as most believe, but instead survived in hiding. This sly satire, borrowing from outrageous real-life Italian politics, features a larger-than-life leader, conspiracy theories and an almost-corrupt press."—New York Times, Paperback Row