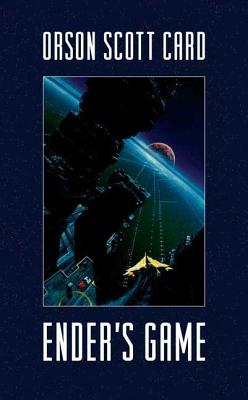 By Orson Scott Card
Not available
Out of Print

This is book number 1 in the The Ender Quintet series.

Winner of the Hugo and Nebula Awards

For the perfect holiday gift for the reader on your list, pick up this special gift edition of one of the most beloved Science Fiction novels ever written.

Andrew "Ender" Wiggin thinks he is playing computer simulated war games at the Battle School; he is, in fact, engaged in something far more desperate. Ender is the most talented result of Earth's desperate quest to create the military genius that the planet needs in its all-out war with an alien enemy.

Is Ender the general Earth needs? The only way to find out is to throw the child into ever harsher training, to chip away and find the diamond inside, or destroy him utterly. Ender Wiggin is six years old when it begins. He will grow up fast.
But Ender is not the only result of the experiment. The war with the Formics has been raging for a hundred years, and the quest for the perfect general has been underway for almost as long. Ender's two older siblings, Peter and Valentine, are every bit as unusual as he is, but in very different ways.

Between the three of them lie the abilities to remake a world. If, that is, the world survives.

Orson Scott Card is best known for his science fiction novel Ender's Game and its many sequels that expand the Ender Universe into the far future and the near past. Those books are organized into the Ender Quintet, the five books that chronicle the life of Ender Wiggin; the Shadow Series, that follows on the novel Ender's Shadow and are set on Earth; and the Formic Wars series, written with co-author Aaron Johnston, that tells of the terrible first contact between humans and the alien "Buggers." Card has been a working writer since the 1970s. Beginning with dozens of plays and musical comedies produced in the 1960s and 70s, Card's first published fiction appeared in 1977 -- the short story "Gert Fram" in the July issue of The Ensign, and the novelette version of "Ender's Game" in the August issue of Analog. The novel-length version of Ender's Game, published in 1984 and continuously in print since then, became the basis of the 2013 film, starring Asa Butterfield, Harrison Ford, Ben Kingsley, Hailee Steinfeld, Viola Davis, and Abigail Breslin. Card was born in Washington state, and grew up in California, Arizona, and Utah. He served a mission for the LDS Church in Brazil in the early 1970s. Besides his writing, he runs occasional writers' workshops and directs plays. He frequently teaches writing and literature courses at Southern Virginia University.
He is the author many sf and fantasy novels, including the American frontier fantasy series "The Tales of Alvin Maker" (beginning with Seventh Son), There are also stand-alone science fiction and fantasy novels like Pastwatch and Hart's Hope. He has collaborated with his daughter Emily Card on a manga series, Laddertop. He has also written contemporary thrillers like Empire and historical novels like the monumental Saints and the religious novels Sarah and Rachel and Leah. Card's recent work includes the Mithermages books (Lost Gate, Gate Thief), contemporary magical fantasy for readers both young and old. Card lives in Greensboro, North Carolina, with his wife, Kristine Allen Card, He and Kristine are the parents of five children and several grandchildren.

“Card has taken the venerable sf concepts of a superman and interstellar war against aliens, and, with superb characterization, pacing and language, combined them into a seamless story of compelling power. This is Card at the height of his very considerable powers -- a major sf novel by any reasonable standards.” —Booklist

“Card has done strong work before, but this could be the book to break him out of the pack.” —New York Newsday

“Card's latest novel is both a gripping tale of adventure in space and a scathing indictment of the militaristic mind.” —Library Journal

“A prize-winning novella has been transformed into an even more powerful book about war, that ranges in topic from reflex-training video games to combat between our inner- and other-directed selves....This book provides a harrowing look at the price we pay for trying to mold our posterity in our own aggresive image of what we believe is right.” —The Christian Science Monitor

“Ender's Game is a fast-paced action/adventure but it is also a book with deep and complex moral sensibilities. Card constructed the book so that layers fold with immaculate timing, transforming an almost juvenile adventure into a tragic tale of the destruction of the only other sentient species man had discovered in the universe.” —Houston Post