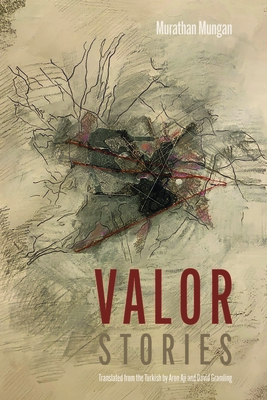 Valor reimagines Shahmaran, a mythical half‑human, half‑snake figure that commonly appears in the folklore of Turkey’s southeastern provinces. Legend interweaves with the contemporary realities of ethnicity, religious dogma, gender, and sexuality. Uncovering hidden narratives within a rich and complicated culture, Mungan’s stories depict self-realization and sexual awakening as they showcase one of Turkey’s most popular literary voices.

MURATHAN MUNGAN is a Turkish short-story writer, playwright, and poet. He is the author of several books of poetry, including Osmanlıya Dair Hikâyat (Stories about Ottomans), Yaz Geçer (Summer Passes), and Metal. An acclaimed fiction writer, his short-story collections include Kırk Oda (Forty Rooms) and Paranın Cinleri (Genies of Money). Mungan’s plays Mahmud ile Yezida (Mahmud and Yezida) and Taziye (Condolence) are frequently staged in Turkey, and he wrote the screenplay for the 1984 film Dağınık Yatak (Messy Bed). Valor: Stories is his first work to be translated into English. Openly gay, Mungan is a prominent advocate for LGBTQ rights in Turkey.

ARON AJI is the director of the MFA in Literary Translation program at the University of Iowa. A native of Turkey, he has translated works by Bilge Karasu, Murathan Mungan, Elif Shafak, Latife Tekin, and other Turkish writers, including three book‑length works by Karasu: Death in Troy; The Garden of Departed Cats, winner of the 2004 National Translation Award; and A Long Day’s Evening, which was short‑listed for the 2013 PEN Translation Prize. He also edited Milan Kundera and the Art of Fiction: Critical Essays.

DAVID GRAMLING is a literary translator working in German, Turkish, Spanish, and English. He wrote The Invention of Multilingualism, The Invention of Monolingualism, and the forthcoming Literature in Late Monolingualism. He serves as head of the Department of Central, Eastern, and Northern European Studies at the University of British Columbia in Vancouver, Canada, on unceded Musqueam land.

“A feast of lyric and legend, Valor: Stories depicts mythical and metaphorical battles about the coming of age, love, rivalry, loss, and perseverance. With roots extending into Anatolia, this collection resonates with the question, ‘Can one who doesn’t believe in stories believe in reality?’ Mungan’s intimate, poetic prose is majestically translated into English for the first time by Aji and Gramling.” —Erdağ Göknar, translator of Orhan Pamuk’s My Name Is Red

“When it was first published in 1986, Valor became a turning point in Turkish Literature for two reasons. First, it formulated stories of power relations in male to male relationships in the form of connected tales and in an unprecedented manner. Second, in Valor Murathan Mungan refreshed the Turkish language drawing on the language of old Turkic tales and masters of modern Turkish radical fiction. With their impeccable translation, Aji and Gramling are able to reflect the freshness Mungan brought into Turkish literature, and they present a timeless text that complicates ideas of love, friendship, desire, and sexuality.” —Selim S. Kuru, University of Washington