Ruth's Journey: The Authorized Novel of Mammy from Margaret Mitchell's Gone with the Wind (Hardcover) 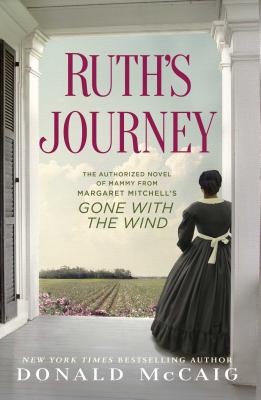 Authorized by the Margaret Mitchell Estate, here is the first-ever prequel to one of the most beloved and bestselling novels of all time, Gone with the Wind. The critically acclaimed author of Rhett Butler’s People magnificently recounts the life of Mammy, one of literature’s greatest supporting characters, from her days as a slave girl to the outbreak of the Civil War.

“Her story began with a miracle.” On the Caribbean island of Saint Domingue, an island consumed by the flames of revolution, a senseless attack leaves only one survivor—an infant girl. She falls into the hands of two French émigrés, Henri and Solange Fournier, who take the beautiful child they call Ruth to the bustling American city of Savannah.

What follows is the sweeping tale of Ruth’s life as shaped by her strong-willed mistress and other larger-than-life personalities she encounters in the South: Jehu Glen, a free black man with whom Ruth falls madly in love; the shabbily genteel family that first hires Ruth as Mammy; Solange’s daughter Ellen and the rough Irishman, Gerald O’Hara, whom Ellen chooses to marry; the Butler family of Charleston and their shocking connection to Mammy Ruth; and finally Scarlett O’Hara—the irrepressible Southern belle Mammy raises from birth. As we witness the difficult coming of age felt by three generations of women, gifted storyteller Donald McCaig reveals a portrait of Mammy that is both nuanced and poignant, at once a proud woman and a captive, and a strict disciplinarian who has never experienced freedom herself. But despite the cruelties of a world that has decreed her a slave, Mammy endures, a rock in the river of time. She loves with a ferocity that would astonish those around her if they knew it. And she holds tight even to those who have been lost in the ravages of her days.

Set against the backdrop of the South from the 1820s until the dawn of the Civil War, here is a remarkable story of fortitude, heartbreak, and indomitable will—and a tale that will forever illuminate your reading of Margaret Mitchell’s unforgettable classic, Gone with the Wind.

Donald McCaig is the award-winning author of Canaan as well as Jacob’s Ladder, designated “the best Civil War novel ever written” by the Virginia Quarterly. It won the Michael Shaara Award for Excellence in Civil War Fiction and the Library of Virginia Award for Fiction. He was chosen by the Margaret Mitchell estate to write Rhett Butler’s People, an authorized sequel to Gone with the Wind. He lives on a sheep farm in the mountains near Williamsville, Virginia, where he writes fiction, essays, and poetry, and trains and trials sheep dogs.

“Exquisitely imagined, deeply researched, Donald McCaig's Ruth's Journey brings to the foreground the most enigmatic and fascinating figure in Gone With the Wind. This is a brave work of literary empathy by a writer at the height of his powers, who demonstrates a magisterial understanding of the period, its clashing cultures and its heartbreaking crises.”
— Geraldine Brooks, author of March

"A much-needed fleshing out of one of the original book’s three major characters."

"Pierces the mystery in which Mitchell shrouded Rhett Butler... The new story has its own integrity... [A] fine novel."

"A must-read for Gone With the Wind fans."
— People

"McCaig creates a convincting backstory and has a real feel for men and the tensions between fathers, sons, friends and soldiers, aqs well as the nuances of Southern honor... The novel focuses on Rhett's point of view and explains exactly where he got his dash."

"A work of genuine literary aspiration that attempts to fill in the psychological blanks behind one of the most captivating enigmas in romantic fiction."

"An engrossing update of Gone with the Wind that fans of the original will definitely give a damn about."

More praise for the novels of Donald McCaig

"This is a tale of courage, cowardice, death, life, growth, war, violence, redemption, and finally, love and compassion... A gentle compelling story."

"The finest novel about the Civil War ever written."

" [McCaig] combines a farmer's eye for the natural world, a poet's ear for language, and the narrative flair of a bred-in-the-bone storyteller. The result is a novel that is credible, compelling, and humane."
— Geraldine Brooks, author of March

"Tantalizing. A flawless orchestration... Masterful... A model of concision, unshowy research and the easy authority of a novelist work with material he intuitively gets."