Day of the Caesars (Eagles of the Empire 16) (Mass Market) 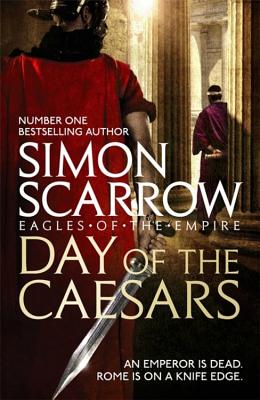 By Simon Scarrow
Email or call for price.
Hard to Find

AD 54. Claudius is dead. Rome is in turmoil. And two brave heroes of the Roman army face the challenge of their lives.

Simon Scarrow's DAY OF THE CAESARS is not to be missed by readers of Conn Iggulden and Bernard Cornwell. 'A new book in Simon Scarrow's series about the Roman army is always a joy' The Times

The Emperor Claudius is dead. Nero rules. His half-brother Britannicus has also laid claim to the throne. A bloody power struggle is underway.

All Prefect Cato and Centurion Macro want is a simple army life, fighting with their brave and loyal men. But Cato has caught the eye of rival factions determined to get him on their side. To survive, Cato must play a cunning game, and enlist the help of the one man in the Empire he can trust: Macro.

As the rebel force grows, legionaries and Praetorian Guards are moved like chess pieces by powerful and shadowy figures. A political game has created the ultimate military challenge. Can civil war be averted? The future of the Empire is in Cato's hands...

Simon Scarrow is a Sunday Times No. 1 bestselling author. His many successful books include his Eagles of the Empire novels featuring Roman soldiers Macro and Cato, most recently DAY OF THE CAESARS, INVICTUS, BRITANNIA and BROTHERS IN BLOOD, as well as HEARTS OF STONE, set in Greece during the Second World War, SWORD AND SCIMITAR, about the 1565 Siege of Malta, and a quartet about Wellington and Napoleon including the No. 1 Sunday Times bestseller THE FIELDS OF DEATH. He is the author with T. J. Andrews of the novels ARENA and INVADER.

Praise for Simon Scarrow's novels: 'I really don't need this kind of competition... It's a great read'—Bernard Cornwell

[Simon Scarrow] blends together historical facts and characters to create a book that simply cannot be put down... Highly recommended—Historical Novels Review