It Began with the Marbles (Paperback) 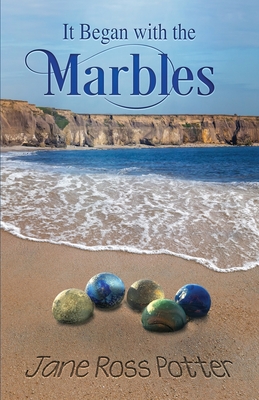 Kelville-by-the-Sea, an outwardly quiet seaside town on the northeast coast of Scotland, has hired a new senior police officer, Helen Griffen. Hardened by a career spent policing in the city of Edinburgh, Helen looks forward to a peaceful last posting before retirement.

But within her first few weeks on the job, Helen discovers that she's inherited a police sergeant who lives in the police station under an assumed name; a seven-year-old missing person case, or maybe a death; an American ballet troupe about to descend on the town, the ballet star a secretive enigma; and the mention of DNA tests sending a local family into a panic. Clearly, there is more to Kilvellie than sea glass, ice cream, and fish and chips.

Helen finds her moral compass shifting: not just hers, but that of her private investigator son Adam who she brings in to make discreet inquiries about the missing person, a teenage girl. With Helen's predecessor fled to sunny Spain, she has no one else to trust. Together they learn that behind the town's calm exterior hides the story of a World War One-era German soldier, the Scottish nurse he married, and how they established a successful glass business and set in motion a cascade of events and side-taking that still resonates.

Adam's suspicion falls on an elderly man who often hobbles out to a cliffside bench to gaze at the North Sea, lost in memories; he is a well-known presence in the town. Helen learns that the man lives in a nearby luxury care home, but how he pays for it is another mystery. She has to tread lightly, though. To complicate matters for Helen, the elderly man's son is Helen's predecessor at the police station, and his grandson is her sergeant: both are implicated in the teenager's disappearance.

The innocent-seeming sea glass that people travel from afar to collect has its own hidden story. That weathered red glass was once a poppy in a war memorial window, and that lettered piece was once the base of a unique glass vase. How the glass reached the beach in the first place, Helen learns, is the true tragedy. But seeking justice for decades-old misdeeds could simply prolong an ancient dispute.

It should be a simple decision, Alistair thought, turn right or turn left. He sat behind the wheel of a right-hand-drive car, and despite spending several weeks in Scotland, he was still feeling his way with the controls after his long experience with American cars. The driveway heading west, away from the seaside chapel, led to a two-lane road going north and south: right turn to the north coast and the ferry to Orkney, left turn toward the rolling fields of Fife and his temporary home in the village of Finlay.

He knew the choice was in his hands, but he also knew the circumstances leading up to it were a century old and complex. His decision a few days ago to pick up some sea glass from a beach. The choice to go to that beach stemming from his career choice a decade ago, to become a private investigator.

Someone in America calling him, saying, since you're in Scotland anyway, can you help me with an assignment? The person in America calling because of a young woman born more than two decades earlier, her survival uncertain, her background a mystery....