The Adventures of Fat Rice: Recipes from the Chicago Restaurant Inspired by Macau [A Cookbook] (Hardcover) 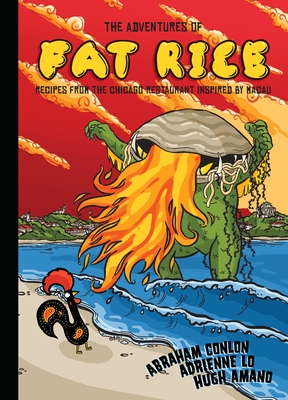 With 100 recipes, this is the first book to explore the vibrant food culture of Macau—an east-meets-west melting pot of Chinese, Portuguese, Malaysian, and Indian foodways—as seen through the lens of the cult favorite Chicago restaurant, Fat Rice.

An hour’s ferry ride from Hong Kong, on the banks of the Pearl River in China, lies Macau—a modern, cosmopolitan city with an unexpected history. For centuries, Macau was one of the world’s greatest trading ports: a Portuguese outpost and crossroads along the spice route, where travelers from Europe, Southeast Asia, South Asia, and mainland China traded resources, culture, and food. The Adventures of Fat Rice is the story of how two Chicago chefs discovered and fell in love with this fascinating and, at least until now, unheralded cuisine. With dishes like Minchi (a classic Macanese meat hash), Po Kok Gai (a Portuguese-influenced chicken curry with chouriço and olives), and Arroz Gordo (if paella and fried rice had a baby), now you, too, can bring the eclectic and wonderfully unique—yet enticingly familiar—flavors of Macau into your own kitchen.

HUGH AMANO is a writer and the former sous chef of Fat Rice.

“What a captivating book! With it, I uncovered the roots of Portuguese cooking and the indelible mark it made on the world. I reveled in the beautiful way Portuguese blended with Chinese in the kitchens of Macau. But most of all, I discovered why the food at Chicago’s incredibly popular restaurant Fat Rice is so utterly delicious. This book opens up a whole new world of flavor!”
— Rick Bayless, chef and owner of Frontera Grill, Topolobampo, and Xoco

“When you read these recipes, it’s like you just found the secret ingredients that were buried away in a treasure chest somewhere in the Pearl River Delta. The Adventures of Fat Rice is a must-have for home (and Jupiter) chefs.”
— Kool Keith, artist and rapper

"Along with the book's visual pop, the evocative introduction and recipe headnotes full of history and stories makes this a cookbook worth owning as a compelling read."
— EATER NATIONAL

"Chances are you’re unfamiliar with Macanese cuisine, from the small peninsula of Macau near Hong Kong. But spend an evening with this comic book-cookbook hybrid, and you’ll be hooked on the fare that makes theChicago restaurant of the same name so beloved."
— TASTING TABLE

"Chicago restaurant Fat Rice draws its recipes from Macau, a port city that blends the flavors of the Portuguese who once settled there with the foods of the various Asian traders who moved through the area. The result is a punchy, bold cuisine of bacalao and grilled seafood, noodles of all shapes and size, and the titular fat rice (arroz gordo).
And did I mention Fat Rice is a comic book? Yup: throughout the cookbook are step-by-step, comic book–style instructions for making crispy rice or stir-frying fat noodles, as well as comic book covers depicting Fat Rice dishes like Crazy Squid and Pato de Cabidela (duck cooked in blood)."
— EPICURIOUS

"Stan Lee and other comic book creators can literally eat their hearts out, as the format of the traditional cookbook continues to evolve. The latest to challenge the standard: The Adventures of Fat Rice."
— EATER

"This is a fun food, so it is only fitting that the cookbook to come out of that restaurant should be equally fun. [The authors] have written a book that reads a little like a Lucky Peach issue crossed with a graphic novel: Yes, there are conventional recipes and lovely photography, but there's also pages of graphics woven throughout the book. . . Yes, this is all as fun--and appetizing--as it sounds."
— LOS ANGELES TIMES

"A joyful exploration of a lesser-known cuisine in America."
— SAN FRANCISCO CHRONICLE