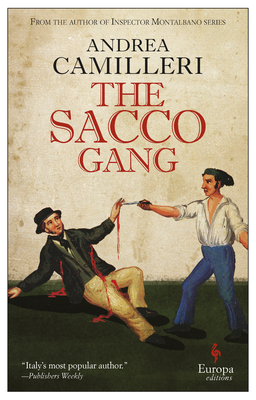 A "wild west" tale of two brothers who battle both the state and a mafia empire in 1920s Italy, from famed Italian author Andrea Camilleri.

Raffadali, province of Agrigento, 1920s. The Sacco brothers are free men with strong ideas about socialism and the State. Their lives change radically one morning when their father, Luigi Sacco, receives an anonymous letter from the local Mafia demanding protection money and is the victim of a robbery attempt. Luigi tells the police of the extortion letters he received, but the police don't know what to do: no one in the village has ever dared denounce the Mafia before. From that moment on, the Sacco brothers must defend themselves: from the Mafia and the forces of order, from their collaborators, traitors, and from the village's leaders, as they are assailed by murder attempts, false accusations, and false testimony.

Through the tale of the Sacco brothers and what happens to the town of Raffadali, The Sacco Gang makes clear that not only does the mafia kill people, but it can also condition and irreparably devastate people's lives.

Andrea Camilleri is widely considered to be one of the greatest living Italian writers. His Montalbano crime series, each installment of which is a bestseller in Italy, is published in America by Penguin Random House. Several books in the series have been New York Times bestsellers. His literary honors include the Nino Martoglio International Book Award. Born in Sicily, Camilleri currently lives in Rome.

Praise for The Sacco Gang

"If history is the story of winners and the powerful, it's not only the fault of historians; the fact is that the traces of the past with which they work--'documents'--are left by those arranging for thier own posterity...Camilleri rebels against this fiction, creating another, more refined and luminous one."
—La Repubblica

"The novels of Andrea Camilleri breathe out the sense of place, the sense of humor, and the sense of despair that fills the air of Sicily."
—Donna Leon, author of the Commissario Guido Brunetti series

"The idiosyncratic Montalbano is totally endearing."
—The New York Times

"Camilleri is as crafty and charming a writer as his protagonist is an investigator."
—The Washington Post Book World