The Art of Making Gelato: More than 50 Flavors to Make at Home (Paperback) 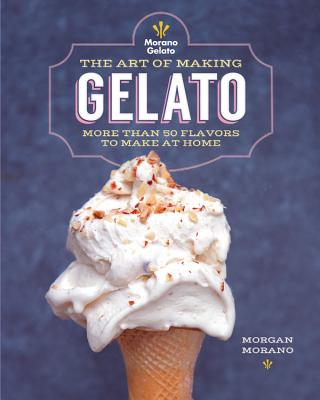 By Morgan Morano
Not available
Out of Print

Learn how to make authentic Italian gelato at home with gelato aficionado Morgan Morano—featuring a step-by-step photo-illustrated introduction to the craft; a guide to its machines, tools, and ingredients; and 50 outstanding gelato and sorbetto recipes.

Gelato, derived from the Latin word gelatus, meaning “frozen,” is Italian ice cream. It is a dense, smooth, creamy, and flavorful frozen dessert that differs in three major ways from American ice cream: it is much lower in butterfat, it is denser, and it is served at a warmer temperature. Anyone who has had real Italian gelato knows how life changing an experience it can be.

The Art of Making Gelato begins by tracing Morgan’s path to pure Italian gelato, from selling shells and lemonade near her father’s beach restaurant to her culinary training in Italy and, finally, her own gelato business, Morano Gelato. Morgan then provides advice on choosing a gelato/ice cream machine and the other tools you’ll need to make authentic gelato at home, including a kitchen scale for measuring your ingredients. She also lists the main ingredients she uses, why she uses them, and where to find them. Step-by-step guides for making gelato and sorbetto, with photos showing each step, make it easy to get started with the 50 flavorful recipes that follow.

The time for store-packaged ice cream and icy, artificially flavored gelato is over.

Morgan Morano is a professional chef and gelato expert. In 2010, Morgan established Morano Gelato after living in Italy, on-and-off, for 6 years. Morgan grew up in New England's Upper Valley and always planned to open a dessert-related business. During college and after culinary school, Morgan gained experience working and cooking in New York City and Italy. The most significant work that she did was for a Sicilian Gelato Chef who quickly became a close friend and mentor. Morgan appreciated the bold flavors of gelato found in Italy and noticed the lack of authentic gelato shops with Italian flavors in America. Disappointed with products claiming to be 'gelato,' she set out to establish the tradition of gelato-making in America and recreate pure Italian gelato.

"With recipes for more than 50 flavours, from avocado to the biscuit-flavour spread Biscoff, you can have even more holiday highs back home."
- Sunday Times Travel Magazine