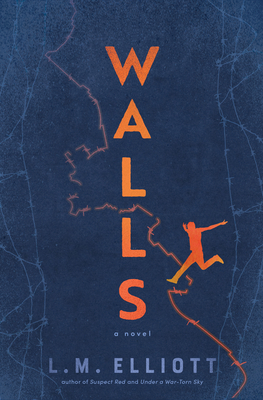 Can two cousins on opposite sides of the Cold War and a divided city come together when so much stands between them?

Drew is an army brat in West Berlin, where soldiers like his dad hold an outpost of democracy against communist Russia. Drew’s cousin Matthias, an East Berliner, has grown up in the wreckage of Allied war bombing, on streets ruled by the secret police.

From enemy sides of this Cold War standoff, the boys become wary friends, arguing over the space race, politics, even civil rights, but bonding over music. If informants catch Matthias with rock ’n’ roll records or books Drew has given him, he could be sent to a work camp. If Drew gets too close to an East Berliner, others on the army post may question his family’s loyalty. As the political conflict around them grows dire, Drew and Matthias are tested in ways that will change their lives forever.

Set in the tumultuous year leading up to the surprise overnight raising of the Berlin Wall in August 1961, and illustrated with dozens of real-life photographs of the time, Walls brings to vivid life a heroic and tragic episode of the Cold War.

L.M. Elliott was an award-winning magazine journalist in Washington, D.C., before becoming a New York Times bestselling author of historical and biographical young adult novels. Her works include Under a War-Torn Sky, Suspect Red, and Hamilton and Peggy.

“Elliott both fills in the historical background—aided by Behm’s mixing of period photos, contemporary news, and pop-culture notes—and crafts a tale of rising tensions that culminates in a suspenseful climax . . . A sensitive exploration of cogent themes in a richly detailed historical setting.”
—Kirkus Reviews, starred review

“Elliott’s latest is set a year prior to the unexpected rise of the Berlin Wall, incorporating all kinds of historical context, including science, world events, politics, and entertainment, through pictures at the beginning of each chapter, allowing readers to immerse themselves in the period. The portrayal of events is first-rate, creating a poignant yet lighthearted read.”
—Booklist