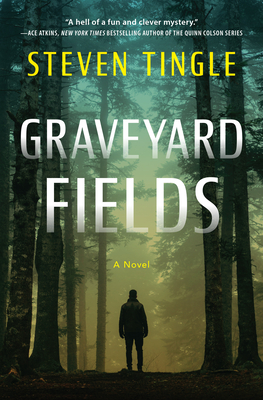 Full of grit and small town secrets, Tingle's debut is a searing look at the effects of crime for fans of David Joy and Michael Farris Smith.

Davis Reed is plagued by the three "A's": anger, alcohol, and anxiety. A former Charleston police officer, turned private detective, Davis hopes to gain some respect, self and otherwise, by writing a book. His subject: the true story of a B-25 bomber that crashed on Cold Mountain in western North Carolina just after the end of World War II.

From the comfort of a mountain cabin in Cruso, NC Davis spends his days popping anti-anxiety pills, drinking copious amounts of home brewed beer, and not writing a book. But when he discovers a set of keys on a mountain trail, he becomes curious, then obsessed, about finding the rightful owner. With the help of his friend Dale Johnson, a 275 pound local deputy who is full time ornery and part time clever, and Dale's cousin Floppy, a motor mouthed mechanic with a penchant for conspiracy theories and kleptomania, Davis works to uncover the mystery of the keys while navigating a world of small town secrets, shady characters, 80's heavy metal, and murder.

But Davis has his own secrets and even though he's escaped to the mountains some bad business in Charleston is beginning to catch up with him. For an anxiety riddled man looking for peace and quiet Davis somehow stumbles into more chaos and crossfire than any amount of beer and pills can alleviate.

Steven Tingle was born and raised in western North Carolina. Before becoming a writer he was a golf resort manager, real estate developer, and restauranteur. As a journalist specializing in travel, style, and food and drink his work has appeared in Robb Report, Modern Luxury, Town, Tempus, and Discovery. He lives in upstate South Carolina with his wife Jess.

"Lovely North Carolina scenery, plenty of good beer and classic rock 'n roll, and a hell of a fun and clever mystery to follow, Graveyard Fields is right down my alley. If you don't have a blast reading this book, I really can't help you."
—Ace Atkins, New York Times Bestselling author of the Quinn Colson crime novels

“Steven Tingle’s debut novel, Graveyard Fields, is a noteworthy, not to be missed summer read. His flawed, but still likeable protagonist, Davis Reed, narrates and moves the story with wit and pedal to the metal.”
—David Swinson, bestselling author of The Second Girl and City on the Edge

"Steven Tingle possesses a smooth and lyrical cadence that will keep you rolling through the pages of Graveyard Fields like a pick-up joyriding across the North Carolina landscape. This is a gripping read, both energetic and thoughtful, and will carry you deep into the night."
—Michael Farris Smith, author of Nick and Blackwood

"Graveyard Fields starts with a bang then reels you into its foggy aftermath: the day-to-day ennui of Davis Reed, a Xanax-numbed ex-PI-turned-aspiring-writer-in-hiding. Reed’s self-deprecating humor, eviscerating descriptions, and punchy jabs of dialogue are so quotable they may as well be trademarked. When Reed’s small, nagging fixations finally catapult readers into a surreal, hilarious crime novel, the result seizes the breath between wheezes of laughter. Graveyard Fields is a smart, redemptive, and cackle-provoking debut."
—Chris Harding Thornton, author of Pickard County Atlas