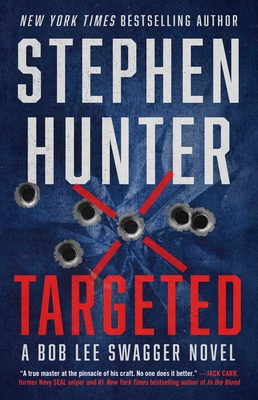 By Stephen Hunter
$17.99
Unavailable
Not Yet Published

This is book number 12 in the Bob Lee Swagger Novel series.

Master sniper Bob Lee Swagger protects a group of political hostages during a perilous standoff in this razor-sharp, white-knuckled thriller from Pulitzer Prize winner, New York Times bestselling author, and “one of the best thriller novelists around” (The Washington Post) Stephen Hunter.

After his successful takedown of a dangerous terrorist, Bob Lee Swagger learns that no good deed goes unpunished. Summoned to court by the United States Congress, Swagger is accused of reckless endangerment by a hardheaded anti-gun congresswoman. But what begins as political posturing soon turns deadly when the auditorium where the committee is being held is attacked.

Swagger, the congresswoman, and numerous bystanders are taken hostage by a group of violent criminals. Soon, the very people who had accused him are depending on him to save their lives. Trapped in the auditorium and still struggling with injuries from his last assignment, Swagger must rely on his instincts, his shooting skills, and the help of a mysterious rogue operator on the outside in order to ensure that everyone makes it out alive.

A heart-pounding and crackling action-packed novel, Targeted proves that Stephen Hunter is “a true master at the pinnacle of his craft. No one does it better” (Jack Carr, Former Navy SEAL Sniper and author of The Terminal List).

Stephen Hunter has written over twenty novels. The retired chief film critic for The Washington Post, where he won the 2003 Pulitzer Prize for Distinguished Criticism, he has also published two collections of film criticism and a nonfiction work, American Gunfight. He lives in Baltimore, Maryland.

"With this inventive nail-biter, Hunter sets a new bar for both himself and the genre. "
— Publishers Weekly (starred review)

"Hunter writes action scenes as well as anyone in the genre…tremendous suspense and a great sense of timing."
— Booklist (starred review)

"Entertaining…Swagger, that old dog, battered and bruised beyond mere mortal possibility, still has a few more tricks left in him."
— The New York Times Book Review

"Another stunning story from a thriller writer without peer."
— Men Reading Books