Founding Documents of the United States of America: The Constitution, the Declaration of Independence, the Bill of Rights, all Amendments to the Const (Hardcover) 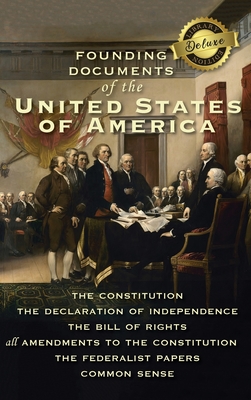 The Federalist Papers is a collection of 85 articles and essays written under the pseudonym "Publius" to promote the ratification of the United States Constitution. The Federalist Papers are notable for their opposition to what later became the United States Bill of Rights. The idea of adding a Bill of Rights to the Constitution was originally controversial because the Constitution, as written, did not specifically enumerate or protect the rights of the people, rather it listed the powers of the government and left all that remained to the states and the people. Alexander Hamilton, the author of Federalist No. 84, feared that such an enumeration, once written down explicitly, would later be interpreted as a list of the only rights that people had.

Common Sense was a pamphlet written by Thomas Paine advocating independence from Great Britain to people in the Thirteen Colonies. Writing in clear and persuasive prose, Paine marshaled moral and political arguments to encourage common people in the Colonies to fight for egalitarian government. It was published anonymously on January 10, 1776, at the beginning of the American Revolution, and became an immediate sensation.