After the Dragons (Paperback) 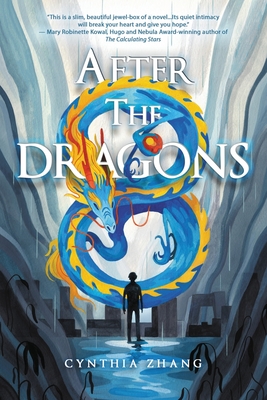 Dragons were fire and terror to the Western world, but in the East they brought life-giving rain. Now, no longer hailed as gods and struggling in the overheated pollution of Beijing, only the Eastern dragons survive. As drought plagues the aquatic creatures, a mysterious disease-shaolong, or "burnt lung"-afflicts the city's human inhabitants.

Jaded college student Xiang Kaifei scours Beijing streets for abandoned dragons, distracting himself from his diagnosis. Elijah Ahmed, a biracial American medical researcher, is drawn to Beijing by the memory of his grandmother and her death by shaolong. Interest in Beijing's dragons leads Kai and Eli into an unlikely partnership. With the resources of Kai's dragon rescue and Eli's immunology research, can the pair find a cure for shaolong and safety for the dragons? Eli and Kai must confront old ghosts and hard truths if there is any hope for themselves or the dragons they love.

After the Dragons is a tender story, for readers interested in the effects of climate change on environments and people, but who don't want a grim, hopeless read. Beautiful and challenging, focused on hope and care, this novel navigates the nuances of changing culture in a changing world.