Snare of the Hunter (Paperback) 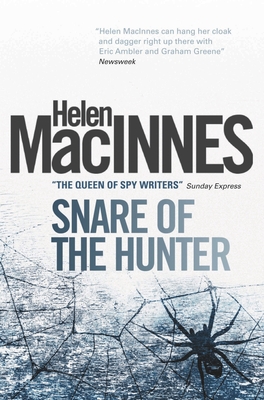 By Helen Macinnes
$9.95
Email or call for price.

Irina Kusak’s recently divorced husband, Jiri Hrádek, is a high-ranking official in the Czechoslovakian secret police: cruel, ambitious, utterly ruthless. So when he turns a blind eye to her defection to the west, she is uneasy. Aided in her escape by a group of friends, including David Mennery, an American with whom she once had a passionate affair, Irina begins to feel herself truly free. But soon their journey becomes a nightmare. It becomes clear that Hrádek only allowed Irina to defect in order to bait a trap for her father, a world-famous author living in secrecy in the west, but when she refuses to lead Hrádek to his quarry, Irina herself becomes his prime target.

As Hrádek closes in and Irina’s life hangs in the balance, David Mennery is drawn into a desperate fight to protect her and finds himself once more falling deeply in love…

Helen MacInnes (1907-1985) was the Scottish-born American author of 21 spy novels. Dubbed "the queen of spy writers", her books have sold more than 25 million copies in the United States alone and have been translated into over 22 languages. Several of her books have been adapted into films, such as Above Suspicion (1943), with Joan Crawford, and The Salzburg Connection (1972).