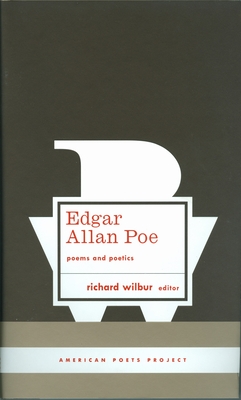 Richard Wilbur, a former Poet Laureate of the United States and one of the most admired poets and critics of his generation, revisits the poetry of Poe, exploring the philosophical seriousness of verse often identified with its macabre and gothic surfaces. Here is the whole canon of Poe’s mature poetry, along with a judicious selection of prose writings that illuminate Poe’s poetic goals.

“Our poetry, in Poe’s view, must specialize in aesthetic transcendence, eschewing the truth, morality, and passion which might entangle it with this present world. The whole movement of Poe’s poetry is away from the material here and now. . . . The poet’s strategy is to accomplish a mock-destruction of earthly things, estranging the reader from material reality and so, presumably, propelling his imagination toward the ideal.” — Richard Wilbur, from the introduction

Read throughout the world, translated by Baudelaire, and admired by writers as different as Dostoevsky and H. G. Wells, Edgar Allan Poe (1809-1849) has become a legendary figure, representing the artist as obsessed outcast and romantic failure. His nightmarish visions, shaped by cool artistic calculation, reveal some of the dark possibilities of human experience. But his enormous popularity and his continuing influence on literature depend less on legend or vision than on his stylistic accomplishments as a writer.

Richard Wilbur (1921-2017), editor, was Poet Laureate of the United States, 1987-88. Over the course of a distinguished career he was awarded the National Book Award, the Pulitzer Prize (twice), and the Bollingen Translation Prize. Among his many books are New and Collected Poems (1989) and Mayflies (2000).

“Poe is so frequently reprinted that another selection can’t possibly seem fresh. Reading him with the guidance of Wilbur, however, helps one think about him again. . . . [Wilbur] appends selections from Poe’s writings about poetics to help understanding of his cosmology and discusses some of Poe’s most intense stories to exemplify his symbolism. The poems, presented chronologically, show again what a young prodigy Poe was, formulating his poetic thought while still in his teens, and what a sonorous Romantic musician he became.” —Booklist