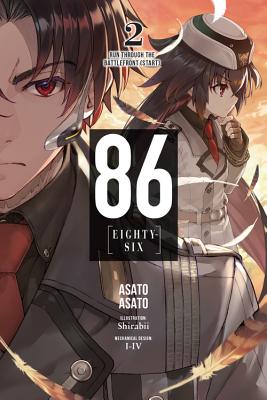 This is book number 2 in the 86--EIGHTY-SIX (light novel) series.

Let's go back to where we belong
Having bid Lena farewell, Shin and the surviving members of the Spearhead squadron continue into the heart of Legion territory. There, they endure countless hardships until they're rescued by the Federal Republic of Giad, a reformed nation that offers them a second chance at a peaceful life. But it isn't long before a sense of duty calls the Eighty-Six back to the battlefield. Choosing to enlist in the military, they willingly walk back through the gates of hell, this time joined by a peculiar new ally-Frederica Rosenfort: a haughty young girl with a rare ability and wisdom far beyond her years.