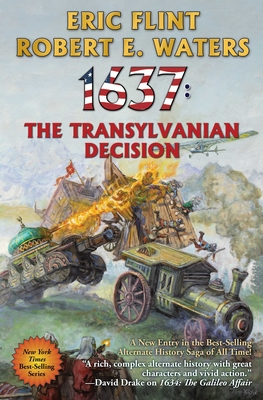 A NEW NOVEL IN ERIC FLINT'S LANDMARK RING OF FIRE SERIES CONTIINUING THE EASTERN EUROPE STORYLINE EXPLORED BY FLINT IN 1637: THE POLISH MAELSTROM.

Up-timer Morris Roth and his Grand Army of the Sunrise stand at a crossroads. Military success against the Polish-Lithuanian magnates has all but guaranteed a continued push east into Ruthenian lands. There, Roth hopes to further his Anaconda Project so that tens of thousands of Jews are not slaughtered in what’s to become known as the Chmielnicki Pogrom of 1648.

An envoy from Transylvania arrives with a promising offer from its prince, who wishes to form an alliance with Bohemia, but the land shrouded in the fog of the Carpathian mountains and known only to most up-timers as the playground of Count Dracula is a vassal state of the Ottoman Empire. Such an alliance would surely draw the ire of Sultan Murad IV.

The United States of Europe agrees to assist the Bohemian forces, and sends in the Silesian Guard, under the command of Brigadier Jeff Higgins. They also send in Gretchen Richter to organize and lead the political struggle.

Transylvania is thrown into political, social, and religious turmoil as battle lines are drawn. Whatever happens and whoever wins the fight, one thing is certain: the history of Eastern Europe will change radically. In fact, it already has.

About 1636: Calabar's War:
“. . . dives into the story of . . . Calabar, a Brazilian military adviser [who] juggles helping [the Dutch] in their fight against the Spanish with rescuing his family, who have been sold into slavery.”—Publishers Weekly

About 1635: A Parcel of Rogues:
“The 20th volume in this popular, fast-paced alternative history series follows close on the heels of the events in The Baltic War, picking up with the protagonists in London, including sharpshooter Julie Sims. This time the 20th-century transplants are determined to prevent the rise of Oliver Cromwell and even have the support of King Charles.”—Library Journal

About 1634: The Galileo Affair:
“A rich, complex alternate history with great characters and vivid action. A great read and an excellent book.”—David Drake

About Eric Flint's Ring of Fire series:
“This alternate history series is . . . a landmark . . .”—Booklist

Eric Flint is a modern master of alternate history fiction, with 3 million books in print. He’s the author/creator of the multiple New York Times best-selling Ring of Fire series, starting with first novel 1632. With David Drake he has written six popular novels in the “Belisarius” alternate Roman history series, and with David Weber, he has collaborated on 1633 and 1634: The Baltic War, as well as four novels in Weber’s Honorverse series. Flint was for many years a labor union activist. He lives near Chicago, Illinois.

Robert E. Waters is a science fiction and fantasy writer. Since 1994, he has worked in the computer and board gaming industry as technical writer, editor, designer, and producer. A member of the Science Fiction and Fantasy Writers of America, his first professional fiction publication came in 2003 with the story “The Assassin’s Retirement Party,” Weird Tales, Issue #332. Since then he has sold stories to Nth Degree,Nth Zine, Black Library Publishing (Games Workshop), Dark Quest Books, Padwolf Publishing, Mundania Press, Dragon Moon Press, Rogue Blades Entertainment, and the Grantville Gazette. Between the years of 1998–2006, he also served as an assistant editor to Weird Tales, and is still a frequent contributor to Tangent Online, a short fiction review site. Robert currently lives in Baltimore, Maryland, with his wife, Beth, their son, Jason, and their cat, Buzz.